Soccer – England and Scotland: Together Against Racism – Sport 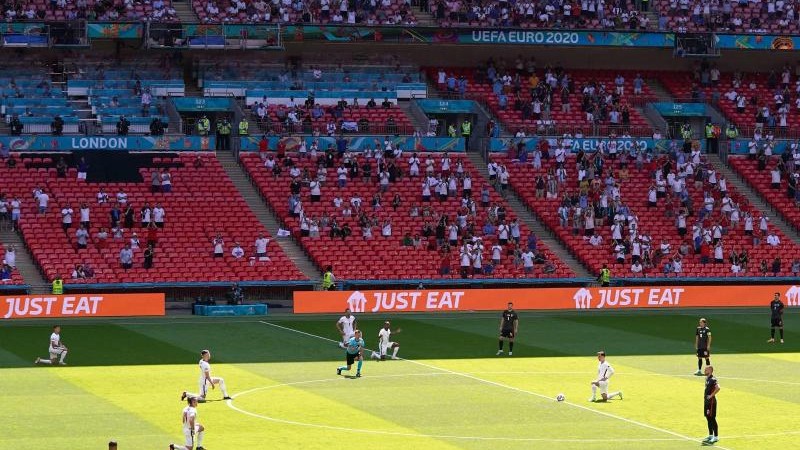 London (AP) – Shortly before kickoff, it will show that they will stick together. When England’s footballers drop to one knee at Wembley on Friday (9:00 pm), Scotland’s players will call.

Out of solidarity with each other and despite repeated criticism from some of the highest political circles, both teams want to set an example against discrimination at the European Championship. “The Scotland team is against racism, but on Friday we will kneel against ignorance and in solidarity with England,” said Liverpool FC’s Scottish captain Andy Robertson.

The controversial ones: “Politics of gestures”

Most of the 22,500 spectators at the London Football Temple will likely applaud the gesture loudly, but some of them will boo the players again. Because the issue is still controversial in Britain. British Home Secretary Priti Patel had criticized kneeling just days ago as a “gesture policy” and had granted fans the right to boo. A day later, the Minister of State, Michael Gove, took a different position and advocated that footballers “should have the opportunity” to express their feelings in the face of prejudice. And the players themselves? They just keep going.

“We have our own point of view on what we can do to help and what can have an impact. In a sense, we stand for what we believe in,” said England international Tyrone Mings after criticism from the Home Secretary. The gesture is anything but new. Since the violent death of African American George Floyd a year ago, England and Premier League players have knelt in solidarity with the “Black Lives Matter” movement. Since the public returned to the stadiums, it has become clear that the gesture is not indisputable. Some fans also booed before friendly matches at the European Championship in England.

“I do not understand that”

“I don’t understand. If you don’t agree with that, maybe you can’t do anything. But booing your own team is a very strange reaction in my opinion,” England coach Gareth Southgate said. Shortly before the successful start of the Three Lions in the European Championship against Croatia (1-0), the England association even sent a public letter to their supporters to support the team as a whole. Even so, some of them also booed last Sunday.

Also part of the truth is that not all black footballers are in favor of kneeling. A few months ago, Wilfried Zaha of Crystal Palace described it as “humiliating”. However, the Belgians flocked to their storm tank Romelu Lukaku before the 3-0 win over Russia on one knee, as did Spanish referee Antonio Mateu Lahoz. They were not stopped by clear whistles and boos from the audience in St. Petersburg, Russia.

Lahoz’s Italian colleague Daniele Orsato had also knelt with the English before the match against Croatia. The Scots will do the same now. “We will show solidarity with our English rivals, many of whom are teammates with our own players,” said Scottish manager Steve Clarke. Basically, the Bravehearts want to stand up against racism. With the exception of the England game, they not only want to show solidarity, they apparently also want to avoid misinterpretation.

The associations do not face any sanction from UEFA. On the contrary: the European Football Union supports protests against racism during the European Championship. “Every player or official” is allowed to do this, UEFA said in response to a request from the dpa. “We urge the audience to show respect to the players and teams that are on their knees.” However, it seems unlikely that everyone at Wembley will comply with this request on Friday.