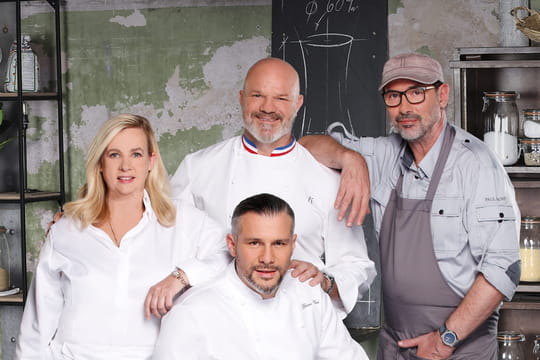 TOP CHEF 2022. The Top Chef jury changes for season 13. Michel Sarran was fired by the M6 ​​production in favor of Glenn Viel. What we know.

[Mis à jour le 16 février 2022 à 20h50] Top Chef returns to M6 this Wednesday, February 16, 2022. The regulars of the cooking program, on the television program at 9:10 p.m., will, however, notice a not insignificant change in the composition of the jury. If Hélène Darroze, Philip Etchebest and Paul Pairet return, Michel Sarran has been replaced by Glenn Viel. The chef from Toulouse left Top Chef by decision of the production, which wanted to renew the jury, we learned on August 31.

In an interview with Le Parisien in September 2021, michel sarran He explained that the announcement of his departure from the M6 ​​show made him “a little bad”, especially since it really would not have been accompanied by explanations. “It was a bit violent. I didn’t expect it at all. Why me? What motivated his decision? What did I do wrong? I didn’t get an answer.”

For his part, Glenn Viel wanted to contact his predecessor before the shooting of Top Chef, revealing in an interview with Télé-Loisirs: “I think it’s normal. And then, we quickly exchanged.” Will Glenn Viel be as popular with viewers as Michel Sarran was? We’ll have to wait a few episodes and reactions from Top Chef fans to find out.

On June 9, 2021, the last season of Top Chef ended with the crowning of Mohamed Cheikh, candidate for Hélène Darroze’s brigade, against Sarah Mainguy. The 2022 edition has been in preparation ever since. Top Chef will be back in M6 on Wednesday, February 16, 2022 from 9:10 p.m.

Fifteen candidates have been selected to compete on the 13th season of Top Chef. Among them, there are in particular 12 men, three women, including 3 Belgians. At the end of the first episode, the candidates who will not be eliminated will constitute the brigades for this 2022 season.

Since the creation of Top Chef, the show’s jury has evolved from season to season, with some chefs leaving the show to be replaced by new names on the French culinary scene. For the 2022 season, Philippe Etchebest (Blue Brigade), Hélène Darroze (Red Brigade) and Paul Pairet (Purple Brigade) return to the jury. For his part, Michel Sarran, emblematic jury of Top Chef, announced that he will not return to the program in 2022. He is replaced by Glenn Viel, who has appeared on several occasions on the M6 ​​program as a guest chef.

During a press conference to present the new season of Top Chef, we were able to learn about the role that Glenn Viel will play this year. The chef of the Oustau restaurant in Baumanière (Baux-de-Provence) will train the orange brigade. “He has every intention of blowing it all up, commented Stéphane Rotenberg. He arrived with energy and the desire to do it very strong”. Glenn Viel explains that he did not specifically ask to be part of the Top Chef 2022 jury, he was contacted by the production. “Of course, I jumped at the chance, he recalls. It is a well perceived competition, well seen, with the best chefs in the world who come to participate. They received me with great benevolence and kindness.”

Top Chef viewers will discover a new jury this Wednesday night. If Philippe Etchebest, Hélène Darroze and Paul Pairet are still present, Michel Sarran has been removed from the program. The latter evokes a production choice, without knowing the reasons: “It was a bit violent, recalls the chef from Toulouse in an interview with Parisina, last September. I didn’t expect it at all. Because I? What motivated his decision? Did I do wrong? I did not get an answer “. He is replaced by Glenn Viel who, according to information from Télé Loisirs, did not fail to contact his predecessor before filming.

During a press conference in January 2022, Stéphane Rotenberg outlined the outlines for the next season of Top Chef. He sums it up with these words: “a new promotion of surprising character on the one hand, and a pantheon of great chefs on the other”. Among the guest chefs already announced for this 2022 edition, let us mention Alexandre Gauthier, elected chef of the year 2016, Clare Smyth, the first woman to earn three stars in the United Kingdom, Dominique Crenn, the first chef three Michelin stars in the United States United, or even Pia Leon, elected best chef in the world in 2021.

On June 9, 2021, Mohamed Cheikh became the winner of the 12th season of Top Chef. The candidate, who completed the entire competition under the guidance of Hélène Darroze, faced Sarah, from Paul Pairet’s squad, in this final. She obtained 54.86% of the votes, compared to 45.14% for Sarah, which gives her a profit of 54,860 euros. This young 28-year-old chef has never hidden that he comes from a popular suburb of the Paris region (Fontenay-sous-Bois), and that he had to struggle to find a place in the middle. . He has worked in particular with several star chefs, such as Eric Fréchon. He has also worked in prestigious restaurants, such as the Royal Monceau or the Shangri-La. Since the start of the competition, Mohamed has been part of Hélène Darroze’s squad.

Each new episode of Top Chef is available the day after it airs on repeat. Simply connect to 6play, M6’s streaming service, to find the episode. However, this one is available for a limited time, so it is recommended that you do not delay before catching up. You can watch Top Chef playing on your computer, tablet or smartphone.