Why is France lagging behind in telecommuting? 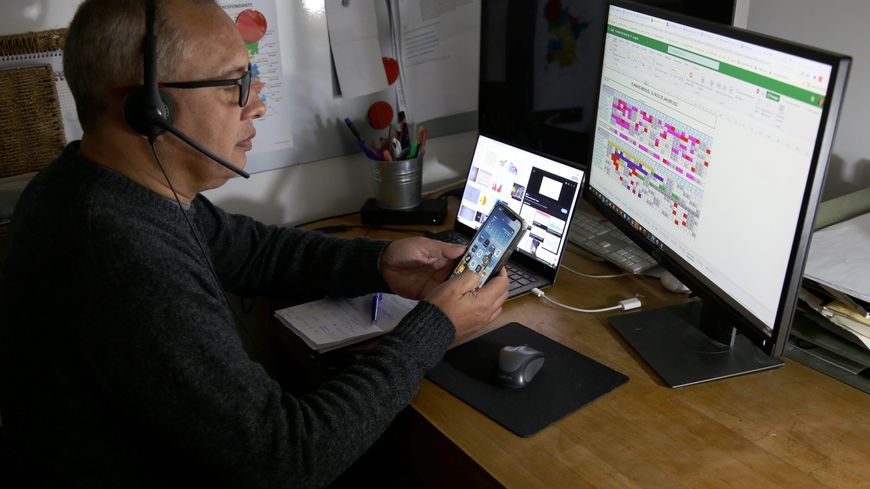 Since January 3 and this for at least three weeks, the health protocol in companies provides “a minimum number of three telework days a week, for positions that allow it”, if possible four, for those who can . But obviously the deposit is difficult to pass.

According to an interactive Harris poll for the Department of Labor, during the week of January 3-9, the proportion of teleworkers remained stable compared to mid-December. However, the number of days teleworked increased slightly among workers who declared teleworking, going from 3 days on average in mid-December to 3.3 days.

Results that allow the executive to defend himself against the administrative fines provided for by the bill that transforms the health pass into a vaccination pass: up to 1,000 euros per affected employee for recalcitrant companies. However, the senatorial majority on the right eliminated these sanctions from the text, strongly contested by the Medef. Deputies and senators will have to find a compromise on the issue this Thursday.

Lags behind our European neighbors

About telecommuting, France is “lagging behind its European neighbors”, estimates Romain Bendavid from the IFOP opinion department, co-author of a survey on teleworking in Europe for the Jean Jaurès foundation and guest at franceinfo this Wednesday. “In France, 34% of the workforce say they telework. It is double in Germany, 56% in Italy, 43% in Spain and 50% in the United Kingdom “He detailed, specifying that this investigation was carried out before the instructions came into force at the beginning of January.

In France, there is a need for control that is very important and a trust that takes time to establish.

“We were already behind Germany and the UK even before the health crisis.”explains Romain Bendavid. According to him, this delay is explained by a management system “vertical” french style what is it “Less in autonomy and in confidence”. In France, “There is a need for control that is very important and a trust that takes time to establish.”.

This delay is also explained, according to him, by the lack of “digitization” in France : “We saw at the beginning of the health crisis that many VSEs had not digitized their activities, especially for sales, and could not telecommute. We also saw great difficulties for employees to adapt due to lack of materials, fiber and digital “, he listed. According to him, to date in France, “Only 30% of working people are eligible for teleworking.”

“Some employees live in the fields with difficult access to the internet”, regrets Philippe Gobinet, CEO of the Partnaire group, with France Bleu Orléans. When you have drivers, when you have a human resources department that must be in constant contact with these employees, a billing department,

“We cannot imagine moving software, computers, files in an apartment in the garden or an employee. For me, it is impossible,” also believes Pascal Fradcourt, President of the CPME de la Somme, guest of France Bleu Picardie.

According to Benoit Serre, vice president of the National Association of HRDs, “In general, companies are playing the game.” Large companies, in particular, can afford it, such as at Safran Helicpter Engines, 2,400 employees in Bordes, in the Pyrénées-Atlantiques. They would be approximately half of being teleworking, according to the CGT, reports France Bleu Béarn Bigorre.

However, “The problem always arises for small companies because they have a fairly tight staff”says Benoit Serre. With “The accumulation of telework and absences, cases of contact, sick people, etc., sometimes makes it a kind of equation impossible to have people in a box.”

“Every morning, it’s a bit of a surprise! “, testifies Hervé Tremblaye, the head of the transport and logistics group of the same name, based in Le Mans. “The absenteeism rate in companies fluctuates between 5 and 12% between contaminated employees, childcare and contact cases, and among us it is rather 12“. Result, every day, should juggle lists.

Another example in Loire-Atlantique, in La Grigonnais, a village of 1,700 inhabitants where the three city council officials have been telecommuting one day a week for several days. “Three days is unthinkable!”says Mayor Gwenaël Crahes. “An agent is equal to a skill, and he is alone in that skill”, he explains.

Some also face theopposition from your employer. Paul (first name changed), 25, informs AFP that at his video game company, “Production teams do not have the right to telework”. “We ended up with contact cases in my open space”, regrets this employee. Another employee of an accounting firm explains that his employer “Invokes the reason for the confidentiality of the information and documents it handles”.