The West united behind kyiv, rejects Moscow’s demand on the ruble 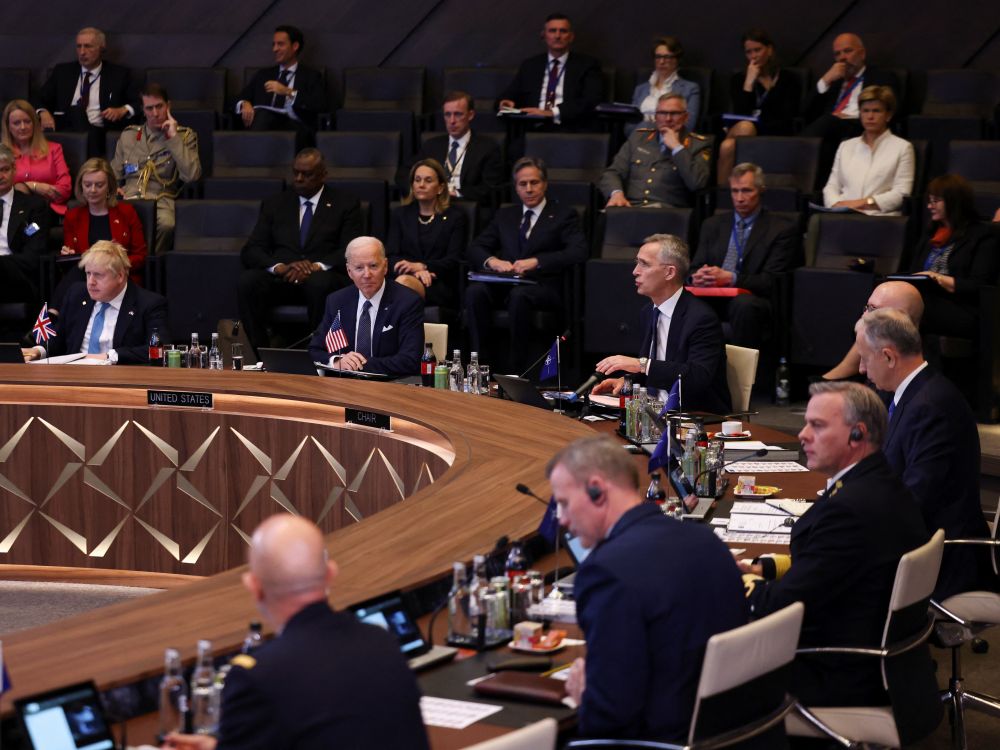 by Marine Strauss and Gabriela Baczynska

BRUSSELS (Reuters) – NATO pledged new military aid to Ukraine on Thursday and sent reinforcements to its eastern flank, while the United States and Britain imposed fresh sanctions on Russia in a show of Western unity over the war in Ukraine.

The member countries of the Transatlantic Alliance also agreed to help Ukraine protect itself against possible chemical, biological or nuclear attacks.

However, the three summits organized by the West in Brussels – NATO, the G7 and the European Union – have probably not lived up to the expectations of Ukrainian President Volodimir Zelensky, who seeks military assistance and much more substantial sanctions against Moscow, a month after the invasion of his country by Russian forces.

The European Union remains divided on whether to sever all its energy ties with Russia, and Germany remains opposed to an immediate embargo on hydrocarbons delivered by Moscow, on which it relies heavily.

With Russia supplying around 40% of Europe’s gas needs, this issue has become even more thorny for the EU since Russian President Vladimir Putin said on Wednesday that “enemy” countries pay in rubles for deliveries. Of gas.

Several leaders of the Twenty-seven have said that they consider this request contrary to supply contracts and rule out the possibility of making payments in rubles.

The offensive launched by Moscow in Ukraine has caused the death of thousands of people and the exodus of a quarter of the Ukrainian population. Russian army shelling hit residential areas, schools and hospitals. Russia denies targeting civilians.

“Putin has already crossed the red line of barbarism,” said British Prime Minister Boris Johnson, whose government announced new sanctions against Russian companies and personalities, as did the United States and Canada.

In a joint statement, NATO leaders reaffirmed their “unity” and “determination” to oppose “Russian aggression” as well as to come to the aid of Ukraine and defend the security of its allies.

Washington and its allies have begun discussing the delivery of anti-ship missiles that could help Ukraine loosen Russia’s grip on Black Sea ports.

“We have decided to intensify the work to avoid escalation scenarios (and to) continue providing defensive and lethal weapons but with a red line that continues without being co-belligerent,” summarized the French president, Emmanuel Macron, during a press conference.

On behalf of the 27 members of the European Union, who were to meet in the evening, Latvia called for a ban on imports of Russian energy products, “to prevent money from entering Russian war chests.”

“We have to stop Putin. Because if we don’t stop him, Putin won’t stop,” said Latvian Prime Minister Arturs Karins.

But the community bloc is far from unanimous on this issue.

Luxembourg has said the EU must keep sanctions in reserve in case the situation worsens further and Dutch Prime Minister Mark Rutte has indicated no new sanctions will be decided on Thursday at the European level.

For the moment, the EU has decided to gradually reduce its energy dependency on Russia, but the hydrocarbons sector is relatively protected by the massive economic sanctions imposed by the West since the beginning of the Russian invasion on February 24.

However, an agreement has been reached for the United States to supply more liquefied natural gas (LNG) to Europe through the United Kingdom.

The Twenty-seven are also fighting to apply the sanctions already adopted against Moscow, in particular against the oligarchs whose fortunes remain virtually intact four weeks after the start of the assault by Russian forces, which killed thousands and left more than 3.5 million dead. of people. flee the country, according to United Nations data.

Russia presents its offensive as a “special military operation” aimed at demilitarizing and “denazifying” Ukraine.

This day of meetings in Brussels under the sign of Western unity began early in the morning at the headquarters of the Atlantic Alliance, gathered in an extraordinary summit, during which Volodimir Zelensky intervened by video message to demand more military aid.

NATO has decided to send reinforcements to Bulgaria, Romania, Hungary and Slovakia, bringing the number of multinational battalions deployed on the Alliance’s eastern flank to eight.

He also warned China against any military or economic support for the Russian war effort.

The G7 and the EU – which will hold a summit with China on April 1 – also said any transaction involving Russia’s gold reserves would be subject to sanctions, in a bid to prevent Moscow from evading punitive measures against it.