The AI ​​of the French start-up Nukkai unbeatable in bridge 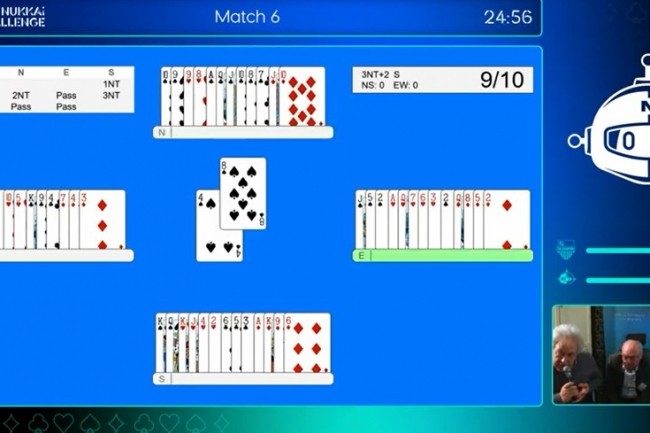 In a bridge competition that took place over 2 days, 8 world bridge champions competed against an artificial intelligence designed by the French startup Nukkai. The latter emerged victorious without a doubt.

After chess or go, it is in the field of bridge where artificial intelligence has once again demonstrated its superiority over humans. As part of a challenge organized on Thursday, March 24 and Friday, March 25, 2022, the AI ​​developed by the French start-up Nukkai emerged as the undisputed winner of the 480 games played against 8 world champions of this game. Precisely, this artificial intelligence has managed to win 83% of the games played and has surpassed the best human players in a game phase, considered essential, located after the auction when the team that plays the contract must win at least the number of tricks has promised to do.

The human champions, Bénédicte Cronier and Thomas Bessis (France), Brad Moss and Roy Welland (USA), Nevana Senior (UK), Sabine Auken (Germany), Anna Gulievich (Russia) and Mikael Rimstdedt (Sweden) have had to do a reverence. to Nukkai’s powerful AI. Unlike chess or go, bridge was until now more “resistant” to AI due to its multiplayer nature, with incomplete information and whose rules require explaining the strategy used to win. “Nukai was able to show human players how their strategy was inferior to theirs, which is unprecedented,” explained Véronique Ventos, President and Co-Founder of Nukkai.

As part of its AI project, Nukkai relied on the capabilities of the Jean Zay supercomputer made available by the CNRS. It was particularly distinguished by its ability to provide performance that requires 200,000 times less power than that used during the Go competition, in which humans competed against Google’s Deepmind technology.

Nukkai was co-founded by Véronique Ventos and Jean Baptiste Fantun in 2018. After a first experiment in 2021, the company achieved success by winning several competitions, including that of Edup, which rewards the most innovative projects in National Education, with its Kartoon solution. used to detect the deficiencies of students in the field of cognitive sciences and in particular mathematics. With around 20 employees today, Nukkai expects to break even within two years. The company has also managed to raise €2 million since its inception, including €1 million through Bpifrance’s deep tech fund.

An opportunity in cybersecurity

In addition to Kartoon, Nukkai also intends to take advantage of the notoriety that this bridging challenge has brought to invest in BtoB markets such as defense, aeronautics or cybersecurity. “Our AI is of interest to cybersecurity players looking for a technology to automate record classification and naming and to rely on our methodologies to create cybersecurity oncologies,” said Jean Baptiste Fantun, CEO of Nukkai.