Nissan celebrates production of its 250,000th electric vehicle at its Sunderland plant 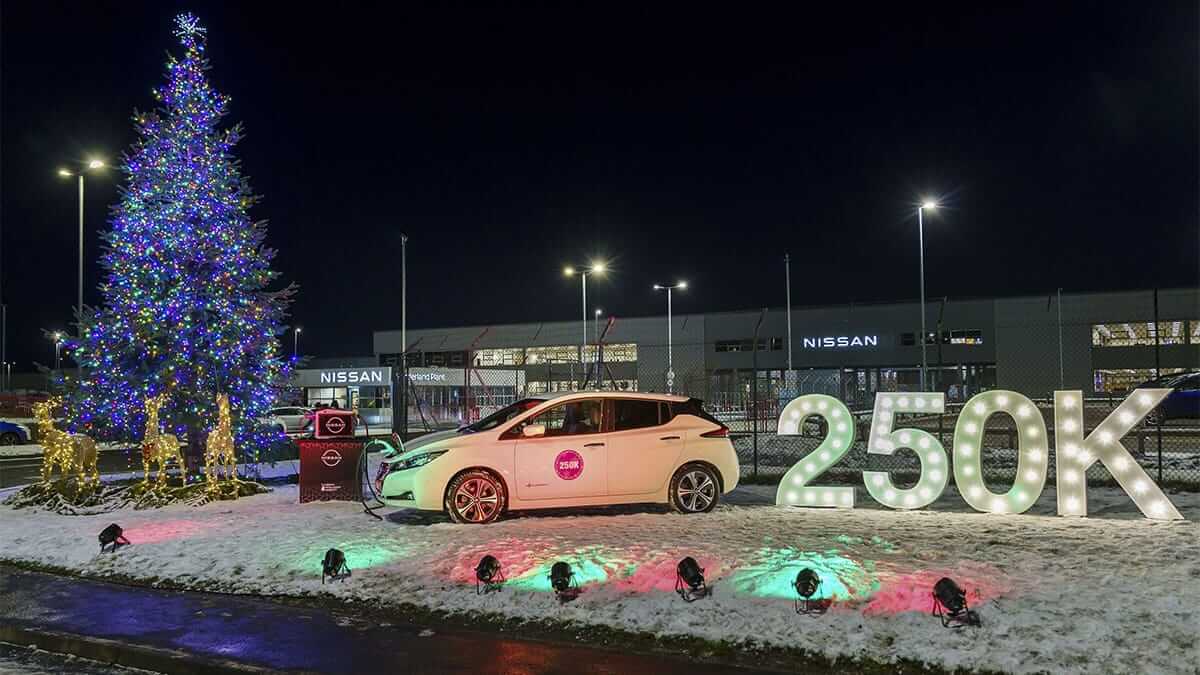 A Nissan LEAF lights up the Christmas display at Nissan’s Sunderland factory to celebrate the UK’s production of the 250,000th example of Nissan’s pioneering all-electric car.

The LEAF thus demonstrates its ability to function as a mobile power station, with the lights of the almost 10-meter Christmas tree and its reindeer powered by the vehicle’s battery, using V2X (or V2X-MAS TREE…) technology.

Alan Johnson, Vice President of Manufacturing at Nissan’s Sunderland plant, said: “Exceeding a quarter of a million Nissan LEAFs produced is a significant milestone and demonstrates the expertise in electric vehicle manufacturing that we have gained at our plant over the last decade. This year, we have fully electrified the factory-produced lineup with new versions of the QASHQAI and JUKE, so lighting up the Christmas tree with our original electric car is the best way to end 2022.”

Nissan LEAF’s vehicle-to-grid capability (sometimes referred to as vehicle-to-building or vehicle-to-everything, i.e. V2G) puts power management in the hands of the vehicle owner by transforming their LEAF into a mobile electricity management center . Whenever they want, owners can use the electricity stored in their vehicle’s battery to power the grid, their house… or their Christmas tree!

This technology allows electric vehicles to be fully integrated into the electric grid and helps improve the grid’s ability to integrate renewable energy and manage power more efficiently.

The Nissan LEAF, produced in Sunderland for over a decade, was the world’s first consumer electric vehicle. The plant also produces the record-breaking crossover Nissan QASHQAI, the brand’s first model in Europe to be offered with Nissan’s exclusive e-POWER system, as well as its smaller B-segment brother, the Nissan JUKE, now It benefits from a sophisticated hybrid engine.

In 2021, the Nissan plant in Sunderland was chosen to be the headquarters of EV36ZERO, an ecosystem dedicated to the manufacture of electric vehicles that, thanks to an investment of one billion pounds sterling (1,150 million euros), will produce the vehicles themselves. , their batteries, and also renewable energy. As part of this project, the plant is currently in the personnel selection phase.