Morgan Super 3, a new generation between car and motorcycle 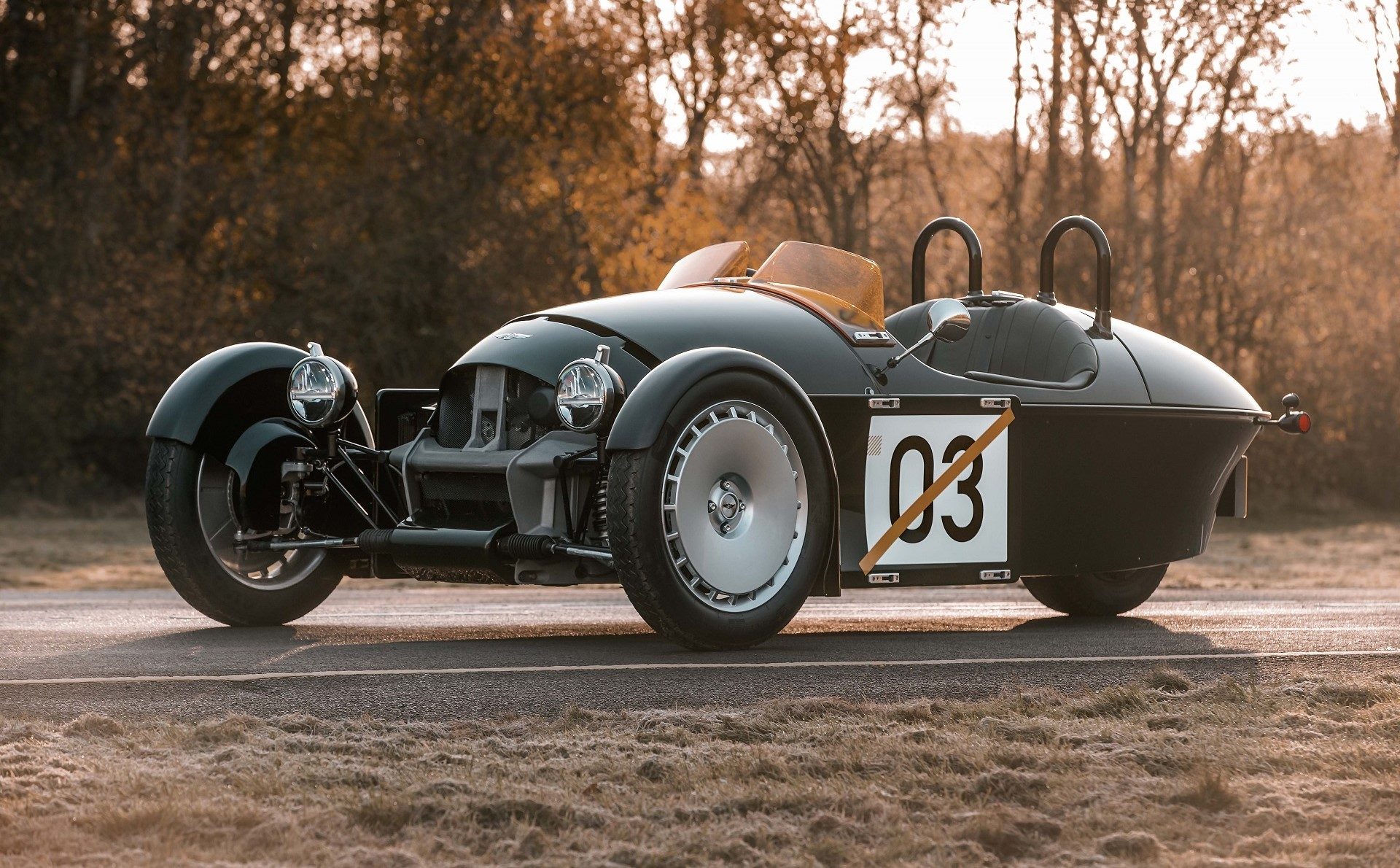 Morgan continues a tradition of the motorized tricycle (two front wheels, one rear) since the first vehicles of its founder HFS Morgan in 1909, with a line that however was interrupted between 1952 and 2011, the year of the launch of the last 3 wheels. This recently retired and is now replaced by the Morgan Super 3. Beneath its still “vintage” trappings, this newcomer crafted from a blank sheet hides a resolutely modern design. Viewed from the side now, the latest from Morgan jumps back in time, even if it doesn’t quite measure up to contemporary style. It was from the “jet age” era, and thus from the American aircraft design of the 1950s, that Morgan’s teams drew inspiration. The previous model rather took its aesthetic from the 1920s with crude forms and highly visible mechanical elements. The Super 3 has a lot more bodywork, with a longer silhouette and an engine now housed under a hood, we’ll come back to that. No unsightly appendages or protruding edges hamper the flow of lines. The front wheels still protrude from the body, between them there are round lights. The receding stern is squeezed back, only cut to the right to let the exhaust out.

A three-cylinder Ford under the hood

This exhaust allows the breathing of a new engine. Gone is the two-cylinder motorcycle resting on the front axle, giving way to a Ford 1.5 naturally aspirated three-cylinder petrol engine installed between the passenger compartment and the front wheels. This positioning, favorable to the balance of masses and, therefore, to the behavior on the road, is possible thanks to the use of a completely new monocoque structure, a first for Morgan. At 3.58m long, 1.84m wide, 1.13m high, 2.53m wheelbase and with a dry weight of 635kg, the Super 3 is significantly larger than the Super 3. his predecessor. The engine continues to drive the rear wheel through a five-speed Mazda MX-5 manual transmission and a carbon-reinforced belt. On the performance side, Morgan announces 7 s to go from 0 to 100 km/h and 209 km/h peak. The chassis is made of agglomerated aluminum and the damping of the front part is carried out by suspension by tie rods. Still slim but modern in design, the Super 3’s 20-inch tires were designed with Avon. They mount new complete wheels at the front, while the rear wheel is hidden under the bodywork.

Accessories hanging from the bodywork

Inside the Super 3, Morgan regulars will find their way around thanks to the counters always placed in the center of the dashboardbut you will be surprised to discover that these now they are digital. Controls are still operated via physical buttons, and these are mostly metal. The upholstery can be a choice of fabric, leather or vinyl and the cabin meets the IP64 standard, which means that it is resistant to dust and splashes of water, even its USB ports according to the manufacturer. On various body panels, we noticed small rails. These are used to hang all kinds of optional accessories that Morgan offers. The offer includes a hitch net, soft saddlebags, rigid suitcases, a trunk gallery, cup holders or a smartphone holder, among others. Seeing 3 Wheeler owners using their vehicle in all kinds of sometimes unexpected conditions, from cruising to international shipping, Morgan developed more than 200 options and accessories for the Super 3. The catalog also includes many customization possibilities, from be it the colors of the bodywork and wheels or decorative stickers, without forgetting the different upholsteries that are offered. Already configurable online, the Morgan Super 3 starts at £41,995 (€50,375) in the UK. The first deliveries in Europe, and in particular in France, are planned for this year.