How Alpha with and without blockade in England … 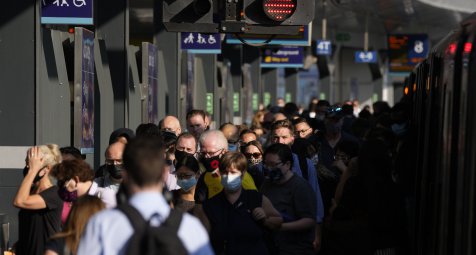 Oxford Variant B.1.1.7, now known as Alpha, spread from Kent to London in November, despite a blockade, from where it spread rapidly across the country. According to a phylogeographic study, the metropolis was in Sciences (2021; DOI: 10.1126 / science.abj0113) for Alpha, a super multi-spreader.

Only so much is known about Alpha’s origins that it originated in Kent before September 20. Since alpha differs from the wild type of the time in several mutations, experts suspect that alpha originated in the body of an immunosuppressed patient who was infected for a long time, during which the virus gradually acquired the various mutations. However, this is currently pure speculation. The identity of the index patient is unknown.

The truth is that Alpha first appeared in the CoG-UK genome database on September 20. England was not blocked at the time, although there were different regional restrictions. The virus was able to spread uncontrollably. He did so initially in the county of Kent, which is located southeast of London with numerous travelers to the metropolis.

Alpha probably brought them to London before the start of the second lockdown on November 5. From there, Alpha spread to other regions despite the blockades. A team led by Oliver Pybus of the University of Oxford estimates that in November the number of cases exported from London to the rest of the country rose from less than 600 to more than 12,000 a week. London was the Alpha super spreader in the nation.

Initially, Alpha spread to the Norfolk and Birmingham regions. After the end of the second blockade, Bristol and the remote regions of Cornwall in the west and Northumberland in the north were quickly reached. London remained the epicenter of the epidemic.

In mid-December there were around 20,000 weekly exports. When the third lockdown began in early January, Alpha was present throughout the UK (except 5 counties). The second blockade limited the number of infections, but did not stop the spread of alpha, according to Pybus, it only slowed down a little, in parallel with the mobility of the population, which can be determined from the location of mobile phones.

The November / December lockdown probably came too late to stop Alpha. Only the long lockdown on January 5, which was slowly loosened from March, was able to reduce the number of infections. Then came the Delta variant, which was again faster than the government. Before travel restrictions were introduced to India, the variant had been established in England, from where, like Alpha before it, it spread across Europe. © rme / aerzteblatt.de