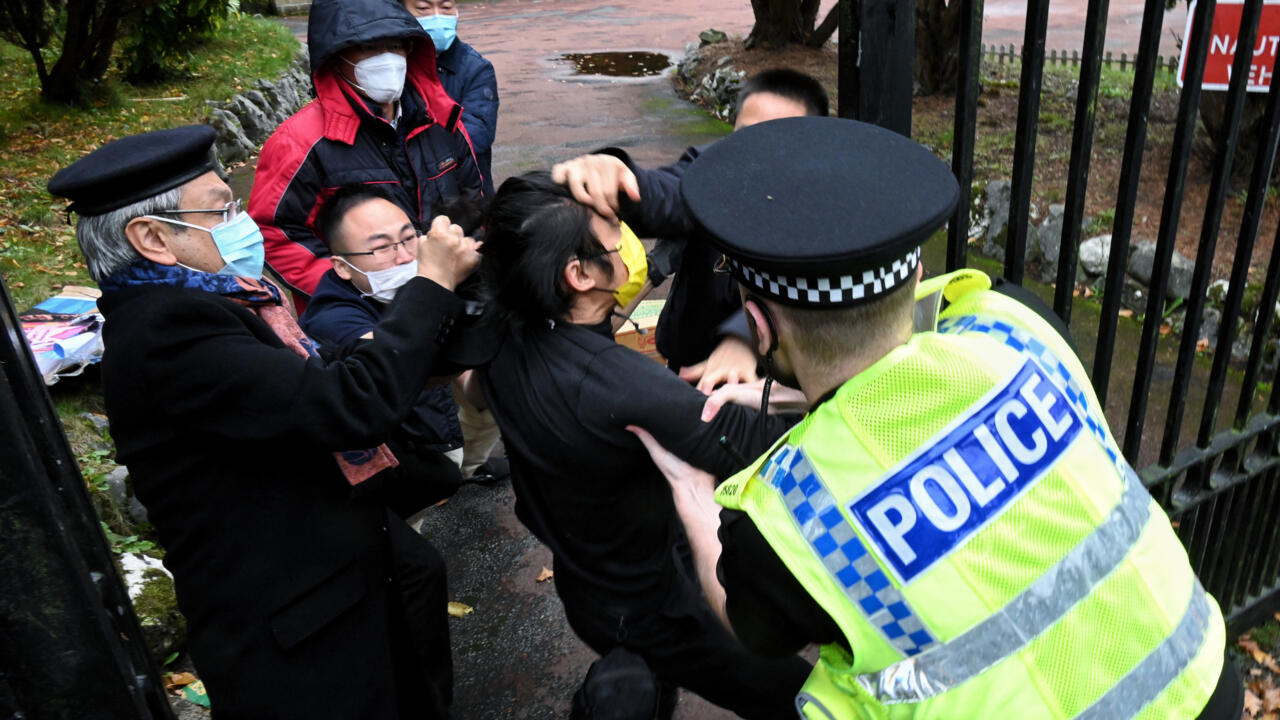 The British government denounced on Monday as “very worrying” the violent attack on a Hong Kong pro-democracy activist who was demonstrating outside the Chinese consulate in Manchester, in the north of England. The victim was beaten just outside the gates of the consulate compound, before finally being rescued by police and other protesters.

A pro-democracy activist From Hong Kong who was demonstrating on Sunday, October 16, in front of the Chinese consulate in Manchester, in the north of England, was beaten after being dragged to the representation compound, facts denounced by London in a context of tensions with Beijing.

The demonstration in front of the consulate, of which the police had been warned, took place on the opening day of the Communist Party congress in Beijing, which should give the president a third term. Xi Jinping. Between 30 and 40 people gathered peacefully, Manchester police said in a statement.

#INCIDENT | We are investigating an assault following a protest outside the Chinese consulate in #Manchester yesterday.

A man was dragged onto the Consulate grounds and assaulted.

Due to our fears for the man’s safety, officers intervened to remove him to prevent further damage. pic.twitter.com/pB3Sz3s8VM


The latter, in his thirties, who suffered several injuries, spent the night in the hospital.

“This information is of course very worrying,” a Downing Street spokesman told reporters, saying it was “inappropriate” to comment further while a police investigation is underway.

Videos show men running out of the consulate and destroying protesters’ banners. Then we see in these images violent shoving in front of the doors and the victim beaten just behind these doors, inside the consulate.

Shocking video broadcast on HK Telegram channels showing someone from the Consulate of the People’s Republic of China in Manchester tearing down pro-democracy banners.

A protester then appears to have been dragged behind the consulate gates and beaten by consulate staff. pic.twitter.com/tntvTz38DY


The Hong Kong pro-democracy activist confirmed to the BBC that he was beaten by men who came out of the consulate to destroy protesters’ banners. “When we tried to stop them, they pushed me inside, they beat me,” he said.

“It’s ridiculous. They (the people who attacked him, editor’s note) shouldn’t have done that. Here we are supposed to be free to say what we want”, in the United Kingdom, added this man.

“We are not aware of the situation you are describing,” Chinese Foreign Ministry spokesman Wang Wenbin told AFP. “The Chinese embassy and consulates in the UK have always respected the laws of the host country.”

These incidents have triggered strong reactions in the United Kingdom, in a context of strong tensions in recent years between London and Beijing, in particular over Hong Kong, a former British colony returned in 1997.

“The Chinese Communist Party will not care about the beating of protesters and the denial of free speech on British streets,” he wrote on Twitter. “The Chinese ambassador must be summoned and if an official has beaten the protesters, he must be expelled or prosecuted.”

“What happened yesterday…is very disturbing and has no place in an area like ours that prides itself on people’s right to peaceful protest,” Manchester Mayor Andy Burnham wrote in a statement.

Most of the figures in the pro-democracy movement are now in prison, abandoned politics or fled abroad after Beijing imposed a draconian national security law in 2020.

“If the consulate staff responsible (for this incident) were not blamed, Hong Kongers would live in fear of being kidnapped and persecuted,” activist Nathan Law, who is based in the UK after fleeing Hong Kong, wrote on Twitter.

At the Communist Party Congress on Sunday, Chinese President Xi Jinping hailed the transition from “chaos to governability” in Hong Kong.