Health politicians for comprehensive reforms in the health system 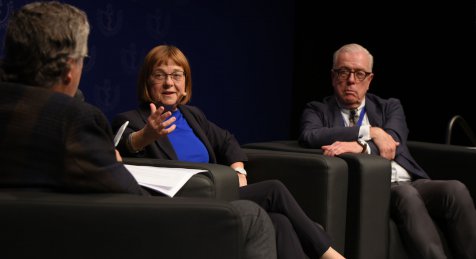 Ursula Nonnemacher (Greens), Minister for Social Affairs, Health, Integration and Consumer Protection of the State of Brandenburg and the President of the Federal Chamber of Physicians Klaus Reinhardt (right) at the 125th German Medical Association in Berlin. /Jrgen Gebhardt

Berlin Participants in the health policy discussion round at the 125th German Congress of Physicians spoke in favor of an increase in the capacity of medical study places, a reform in the hospital sector and a better integration of intersectoral care in standard care.

Ursula Nonnemacher (Greens), Minister for Social Affairs, Health, Integration and Consumer Protection of the State of Brandenburg, was alarmed by demographic change and the growing shortage of skilled workers.

The key challenge for the health care of the future is to hire enough medical and nursing staff. In this context, the question of a distribution of available doctors according to the need for care must also be resolved, guaranteeing medical care also in the most rural and structurally weak regions.

Karl-Josef Laumann (CDU), Minister for Labour, Health and Social Affairs of the State of North Rhine-Westphalia, emphasized that in order to compensate for developments such as increased part-time quotas and increased care needs, there must be an expansion. study sites for human medicine. He referred to the corresponding initiatives of the state government of North Rhine-Westphalia.

Klaus Reinhardt, President of the Federal Chamber of Physicians (BK), had previously called for more studio capabilities in his opening remarks. During the discussion, he repeated the warning that there was no doubt that more doctors needed to be trained. Claudia Bernhard (left), Senator for Health, Women and Consumer Protection of the Free Hanseatic City of Bremen, also warned emphatically that a wave of shortages among the medical profession was already beginning.

Preparing hospitals for the future

In addition to the issue of skilled workers, a possible reform in the hospital sector played a central role in the discussion. Laumann spoke in favor of a comprehensive reform of the system of diagnosis-related flat fees per case (GRD), in particular, the basic financing of certain central care structures is necessary. Bernhard agreed: maintenance costs and basic care structures would have to be financed outside the DRG system.

Brandenburg Health Minister Nonnemacher noted that a reform of the current DRG system was already under political discussion and also played a role in the exploratory document of the possible traffic light coalition. It is important to focus more on health care in structurally weak areas. Otherwise, it pays political costs on a high proportion of AfD voters.

Both Laumann and Nonnemacher cautioned against addressing structural problems in the inpatient sector through Federal Joint Committee guidelines (GBA) to want to solve. According to Laumann, issues related to the structure of the hospital sector must remain within the purview of the political mandate.

According to Nonnemacher, the G-BA specifications should not mean that care in rural areas is no longer possible. Here a balance must be found between this statement and the specifications of the self-governing body, which for some institutions in Brandenburg can hardly be afforded.

On this topic, the president of the Federal Chamber of Physicians, Reinhardt, took up the BK’s suggestion to initiate a hospital summit with the participation of all interested parties. Such a platform could then be dedicated to the long-term project of reforming the DRG system.

According to Reinhardt, adjustments are also needed to more firmly establish transversal care models. In order to be able to more easily anchor the networks and the constructions that exist about it, some of which are great, in standard care, the configuration of the applicable social law would have to be optimized.

The health politicians present agreed. Many models of care with intersectoral approaches are currently on the verge of legality, especially in view of the growing shortage of skilled workers, the transfer to standard care of compulsory health insurance should be easier. Nonnemacher and Laumann also warned that innovative, cross-sector projects cannot be sustained without regulated accounting options.

There was also agreement on the issue of marketing and here in particular the entry into the structures of the Medical Care Centers (MVZ) with external capital. The tenor was that MVZs should also be sensibly integrated into regional supply structures.

To avoid a mere diversion of returns, the regional reference and the exact contribution of supply must be defined, Laumann said. Bernhard emphasized that he expected regulation at the federal level. © bee/aha/aerzteblatt.de