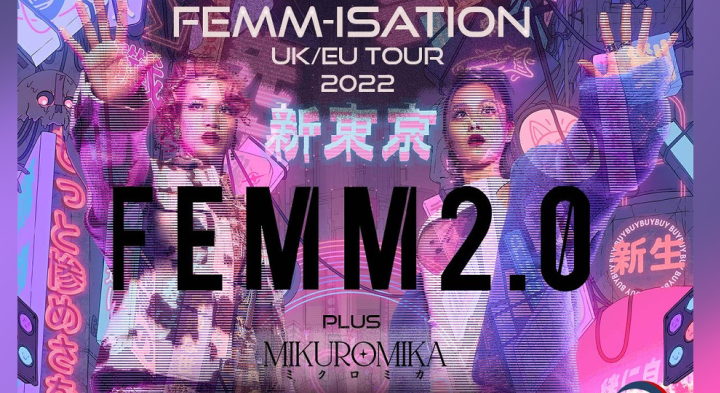 Rap/J-pop duo FEMM have some exciting news for their fans across Europe and the UK. The team is planning their overseas tour called “FEMM-Isation UK/EU tour 2022” this year. After some congresses and events, the team finally appears as a headliner, so the group can perform their songs in full. This July will be the long-awaited one and give full dose of FEMM live. All further details on more precise dates will be announced in the coming weeks.

The two musicians still have a few more announcements up their sleeves. House-inspired J-pop singer MIKUROMIKA will be joining them on an overseas tour. For music, the “FEMM-Isation UK/EU tour 2022” will also be her first touring experience. Fans of the duo can already look forward to a series of fan-favorite songs.

They announce the CD edition of the last two FEMM albums

The tour is presented by Orion Live in association with Ran Touring. As for the details of the next tickets, it is already known that there will be a VIP package. Additionally, JPU Records is releasing FEMM’s latest two albums “Tokyo Girls Anthem” and “Tokyo Ex Machina” on CD for the first time to celebrate their EU and UK tour. The physical version of the albums will be available before the tour. The group’s previous releases are also being reissued on CD due to popular demand.

The rap duo FEMM is made up of the two mannequins RiRi and LuLa. His most famous work is “Fxxk Boyz Get Money” which went viral among international influencers and “agents” (FEMM fans) in Europe, South America and Asia. With the concept in mind, a completely new sound that doesn’t exist yet, they released their EP 404 Not Found in 2020. The group has turned heads not only among their fans but also around the world with their darker style and more aggressive music. called “Hyper Pop”.

Singer-songwriter MIKUROMIKA combines elements of house, vocal trance, and j-pop. With her rather calm pop vibes and elegant singing of hers, she calls her musical style “MIKUROPOP”. The musician draws inspiration from Japanese R&B legend MISIA, but also icons such as Lady GaGa and Cyndi Lauper. Her debut album was released on Setsuzoku Records in 2021 and is titled MIKUROPOP. The album was produced by Argentine DJ and producer Delta Ouji.

At this point you will find external content from YouTube that complements the article. You can show it and hide it again with a single click.

I consent to external content being displayed to me. This allows personal data to be transmitted to third party platforms. Read more about our privacy policy.