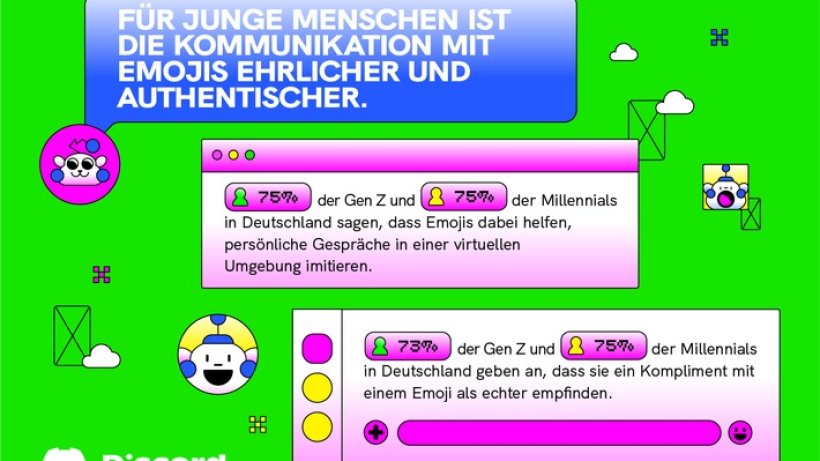 Frankfurt (ots) – Discord publishes the results of its first global emoji survey. “The Emoji Effect” looks at the psychology behind emojis and their importance to modern communication. Around 4.3 billion emojis are sent on Discord every week and more than 70% of Gen Z in Germany feel that online conversations are more personal and compliments more real thanks to emojis.

With “The Emoji Effect”, the voice, video and text communication service Discord presents its first study on the country-specific peculiarities and differences of the universal language of emojis. With an average of 4.3 billion emojis used on Discord each week worldwide, the study examines what the mainly Gen Z user base expects of emojis. The communication of 16,000 emoji users around the world shows, according to the results, that young people in particular are shaping the future of emojis. In fact, GenZ and Millennials are convinced that emojis promote diversity and inclusion, help express personal things, deepen interpersonal relationships, and ultimately improve trust and honesty in digital communication.

In Germany, Generation Z (73 percent) and Millennials (75 percent) in particular perceive virtual conversations via emoji as more personal and compliments as real.

Emojis are also very popular in Germany: almost all Germans are aware of them (97 percent) and Germans use emojis most frequently in emails (62 percent) and text messages (62 percent). A large majority also think that emoji have a positive impact on the tone of the conversation (92 percent).

Other study results for Germany are:

– Nearly 7 in 10 Germans think emojis bring people together (68 percent) and help them better understand other people’s feelings (67 percent). – Three quarters of German emoji users (75 percent) believe that emoji strengthen their relationships with friends, while around 7 in 10 emoji users (71 percent) feel the same about their relationships with the family. – Germans use emoji most often when joking (88 percent), sharing positive messages (84 percent) and flirting (72 percent). – In Germany, 75 percent of Generation Z (18-34 years old) and Millennials (35-44 years old) believe that emojis help to mimic face-to-face conversations in a virtual environment. – 73 percent of German Generation Z (18-34 years old) and 75 percent of Millennials (35-44 years old) say they find a compliment with an emoji more genuine.

“On our platform, we see emoji becoming more popular with our users, so we want to understand how people feel about using emoji in their communications and where they see the greatest potential,” said Nicole Brendis, Director of Marketing at Consumer Products on Discord. “In Generation Z, we’re seeing a strong desire for emojis that not only represent our emotions in the best possible way, but also enable deeper, more authentic connections.”

On Discord, updating “Emoji Power” is one of the most popular advantages of Nitro (http://discord.com/nitro), the paid subscription service of the communications service. Users love the ability to use custom, animated emojis on and between servers or in direct messages. Nitro users have access to over 500 million custom emojis across all Discord servers.

Last month, Discord also introduced Nitro Basic (https://discord.com/blog/introducing-discord-nitro-basic), the latest addition to the Nitro offerings and a new entry level for even more fun. Down:

– Animated and Custom Emojis Everywhere: Custom emojis are free to use from any dedicated server and are deployed anywhere emojis can be used on Discord. – Larger File Uploads: Photos, videos and other arbitrary files up to 50MB in size can be uploaded. – Special Nitro Profile Badge: Users will receive a fancy profile badge for their user profile to show their support.

You can learn more about Discord Nitro and Nitro Basic here (https://support.discord.com/hc/en-us/articles/115000435108-Discord-Nitro-Classic-Nitro).

The accuracy of the Harris Online Survey sample is measured using a Bayesian confidence interval. For this study, the sampled data is accurate to +1.2 percentage points at the 95% confidence level, and a small base of emoji users were asked specific questions. This credible interval will be wider for subsets of the survey population of interest.

Founded in 2015, Discord is a voice, video, and text communication service. Discord has made it a mission to create a space where everyone can find their community. With over 150 million monthly active users on 19 million servers, Discord helps friends and communities of all sizes find each other and explore their interests. Discord offers a premium subscription called Nitro, which gives users special benefits like higher quality streams and more customization.