Coronavirus Related in Bats in the UK … 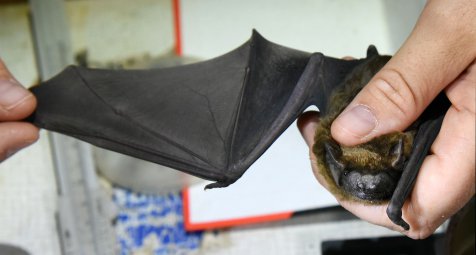 London – Bat species, which are a possible reservoir for novel coronaviruses such as SARS-CoV-2, exist not only in China, but also in some cases in Europe. British zoologists have discovered a previously unknown coronavirus in the west of England and Wales which, according to their report, was found in Scientific reports (2021; DOI: 10.1038 / s41598-021-94011-z) is genetically closely related to SARS-CoV-2, except for the ACE2 receptor binding site.

Contrary to all conspiracy theories, the origin of SARS-CoV-2 is unknown. Most experts suspect that the reservoir is in bat species. The closest relatives of the pandemic virus were found in the horseshoe bat (Rhinolophidae), some species of which are also common in Europe, including the lesser horseshoe bat (Rhinolophus hipposideros).

A team led by Andrew Cunningham from the London Institute of Zoology captured some specimens in Somerset / England and Monmouthshire / Wales and examined the animals’ faeces. After just 53 samples, a previously unknown new sarbecovirus (“SARS-related coronavirus”) was quickly found.

Genome analysis showed an amino acid sequence match of 77% with SARS-CoV-2 and 81% with the first SARS-CoV. However, it is not infectious to humans because, according to Cunningham, there are large deviations in the receptor binding site. However, Cunningham does not think it is ruled out that viruses can become zoonotic viruses through genetic changes.

The danger exists if a horseshoe bat becomes infected with SARS-CoV-2. In this case, there could be a gene exchange between the two viruses. Therefore, Cunningham advises anyone who comes into contact with bats or their droppings, such as cave explorers or conservationists, to wear appropriate protective clothing.

A team led by Christian Drosten, from the University of Bonn (now Charité), had in the last year Virolo’s Diary­gy2020; 84: 11336-11349) reported on coronaviruses that were found in various national parks in Bulgaria as early as 2008.

Some of the viruses were found in higher concentrations in the feces of horseshoe bats (Rhinolophidae) and smooth-nosed bats (Vespertilionidae). Next, a virus was completely sequenced.

The peak protein of the virus showed clear differences with SARS-CoV-2 (which is why “BM48-31 / Bulgaria / 2008” is not an option as a precursor to SARS-CoV-2). At the receptor binding site, the matches with SARS-CoV-2 were higher than with all coronaviruses discovered in China. © rme / aerzteblatt.de