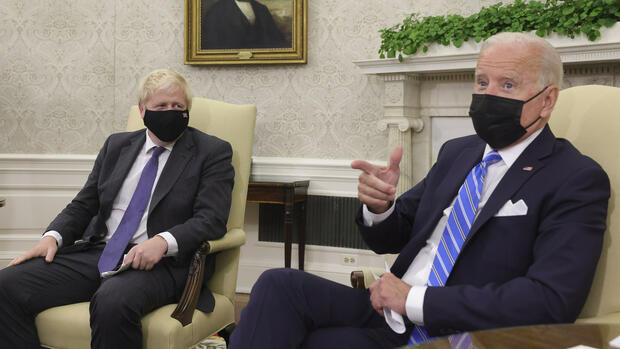 London There was great excitement in London last week about the submarine alliance with Australia and the United States. Great Britain not only eliminated one of the favorite rivals, France, with the surprise blow. The Aukus Pact seemed to finally give the UK the place on the world stage that it felt it deserved.

Ironically, Boris Johnson’s visit to Washington is now spoiling the good mood. The British prime minister continues to be denied the grand prize of Brexit, a free trade deal with the US, promised years ago. In the Oval Office, Johnson was rebuffed by US President Joe Biden. The guest took note of it in a sporting way and spoke of “other options” that he is now pursuing.

Biden has never hidden that international trade agreements are not his priority. But for Brexiteers, another illusion is now fading: that the world will suddenly open up to the British once they have left the EU.

Even under Biden’s predecessor, Donald Trump, the two encouraged each other to conclude a quick trade deal. The British would be first in line, the American had promised. It was already clear then that the conflicting interests are so great that a deal would be extremely difficult and lengthy.

best jobs of the day

Brexit is still a losing proposition

The British people share the reservations that caused the failure of the European-American TTIP trade agreement. He wants to protect his agriculture and health system from corporate America. The United States, on the other hand, demands far-reaching access to these markets.

For this reason, the Johnson administration’s Plan B is also likely to fail. According to media reports, Britain is considering joining the US trade agreement with Canada and Mexico (USMCA). Here too, however, the country would have to accept US food standards, which it has so far rejected. On top of that, the new member would probably have to agree to the rules, there would be no voice.

The promised Brexit dividend is not reflected in trade policy. Although the UK has just signed a first trade deal with Australia, which the EU does not have, the effect is negligible. A deal with superpowers the US or China, on the other hand, remains unlikely.

Meanwhile, trade relations with the world’s third largest economic bloc have deteriorated sharply: British exports to the EU have fallen by around a fifth since the beginning of the year. The bottom line is that Brexit remains a losing proposition.